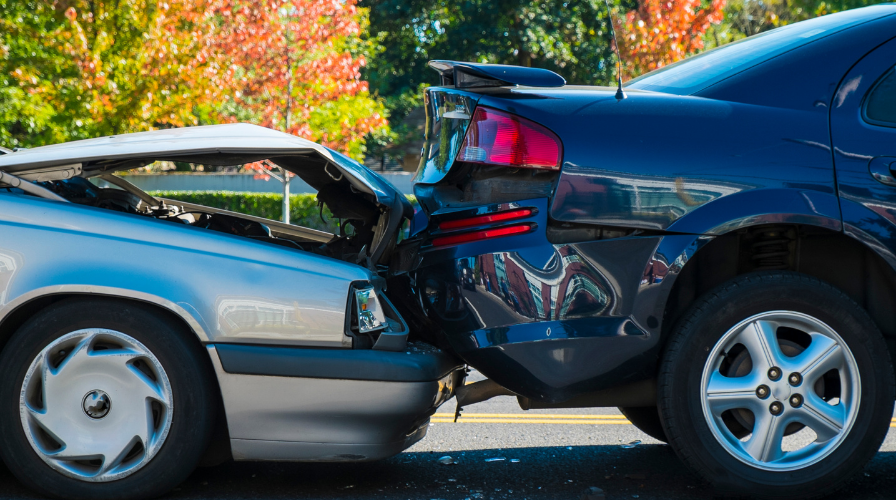 Mr. Smalls was driving his daughter to school on the morning of January 19, 2012.  Mr. Smalls was a 47 year-old husband, father of four, and working full-time as an electrician foreman.  He was involved in a head-on collision when he was driving through an intersection and the Defendant turned left in front of him.  Both vehicles, Mr. Smalls’ pickup truck and the Defendant’s SUV, were destroyed.  Mr. Smalls did not complain of injury at the scene.  His daughter did, however, and she was taken by ambulance from the scene to the Gwinnett Medical Center ER.  Mr. Smalls went with her – he never left her side, even in the ER.  Mr. Smalls was evaluated by an ER physician and diagnosed with right knee pain and an abrasion on his head.

Mr. Smalls went to work the next day.  A few days later, however, Mr. Smalls felt lower back pain that he never felt before in his life.  He subsequently went to a chiropractor, who ultimately treated him and ordered that he get an MRI of his lumbar spine taken.  Mr. Smalls’ lumbar MRI was taken nearly 1 month after the wreck and showed a disc protrusion/annular tear and post-traumatic endplate infarctions at L4-L5 and L5-S1.  His chiropractor referred him to a pain management specialist for a consultation.  Mr. Smalls was considered at-risk for having exacerbations to his lumbar pain and a candidate for 3-4 lumbar epidurals per year.

In June of 2012, Mr. Smalls gave up on conservative treatment and tried to get accustomed to living and working with lower back pain.  After a lengthy amount of time without receiving any treatment, Mr. Smalls succumbed to his pain and returned to his pain management specialist. In November of 2012, he received bilateral facet joint injections at L4-L5 and L5-S1 (with marginal relief) and bilateral transforaminal epidural steroid injections (“ESI”) at L5-S1.  The pain persisted to his lower back pain radiating into his legs.

Mr. Smalls ultimately received two additional ESI’s at L5-S1 before he underwent an anterior diskectomy at L5-S1 with decompression and fusion on June 16, 2013.  Unfortunately, Mr. Smalls still felt radiating lower back pain.  He received four additional ESI’s at L5-S1 before he underwent a laminoforaminotomy at L5-S1 on July 10, 2014.  To-date, Mr. Smalls is still receiving pain management treatment under the supervision of his orthopedic surgeon.

In January of 2013, we filed a lawsuit against the Defendant in Gwinnett County State Court.  This case was assigned to Chief Judge, Pamela South.

Before filing a lawsuit against the Defendant, in September 2012 to December 2012, we sent four (4) settlement demands to the Defendant’s liability insurance company for $25,000.00 (Defendant’s policy limit) in exchange for a Limited Liability Release under O.C.G.A. § 33-24-41.1, since Mr. Smalls had a personal UM policy of $25,000.00 in add-on coverage.  Mr. Smalls’ medical expenses were $10,624.58 and $13,614.58 from the time we sent demand 1 to the time we sent demand 4.  At all times, Mr. Smalls’ lumbar MRI report and medical records containing his recommendation for future epidurals were included.

The Defendant filed an Answer that denied all liability for the wreck and all responsibility for Mr. Smalls’ injury – this was an “all or nothing” defense.  During litigation, the defense took Mr. Smalls’ deposition twice.  Hoping to prove that Mr. Smalls lied under oath about never complaining of back pain before this wreck, Defendant’s counsel requested and obtained every medical record from every medical provider Mr. Smalls had ever visited, seen, or treated with, before and after the wreck.  Despite thousands of pages of medical records, not one record mentioned that Mr. Smalls had ever complained of lower back pain before this wreck.

In February of 2015, the defense hired Bennett Axelrod, MD to claim that the wreck exacerbated pre-existing degeneration and that Mr. Smalls was fully-healed as of June 2012.  In late April of 2015, the defense hired Keller Carlock, MD, a radiologist, to prove that Mr. Smalls in-fact had degenerative changes in his spine before this wreck – something we did not dispute.  The defense never willingly disclosed that they hired these two experts.

In March of 2015, we were notified that the Defendant’s liability insurance company hired a lawyer and preeminent politician in Atlanta to represent the insurance company against any future claims for bad faith failure to settle.

In late April of 2015, the Court notified the parties that this case was going to trial in May, 2015.  Within 10 days before trial was to being, the defense finally disclosed that they hired Dr. Axelrod and Dr. Carlock.  We filed a motion for continuance based on discovery violations.  In response to what the Court perceived was a “trial by ambush,” the Court prevented the case from going to trial and scheduled a specially-set date for trial on November 2, 2015.

Trial started Tuesday and the jury received the case for deliberations just before lunch on Thursday, November 6, 2015.  After 2 hours of deliberations, the jury returned a verdict for Mr. Smalls in the amount of $3,700,000.00, thereby triggering the penalties against the Defendant for failing to settle this case for $475,000.00.

We spoke with the jury after the verdict and the foreperson informed us that the entire jury appreciated our presentation of the evidence and of Mr. Smalls.  The jury was offended by the defense’s attempt to call everyone a liar and their attempt to persuade the jury that Mr. Smalls and his entire family were just “out to get money.”  The lowest amount the jury considered was $3.5 million and the highest amount they considered was $4.4 million – they spent the majority of their time wrestling with a compromise.

After three years and two lower back surgeries, we can truthfully say that Mr. Smalls earned his day in Court and was victorious.